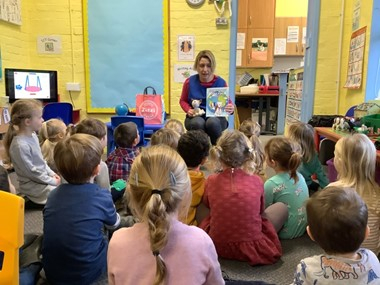 Posted at 17:41h in Learning by Chris Brooker

At Holy Apostles’ Preschool, one of the best preschools in Gloucestershire, we have started to learn some words and phrases in French.

In week one we had fun listening to Mrs Unsworth’s new picture storybook “SPEAK SCRUFFY! HAVE A GO!”.  We widened our vocabulary and began to speak some French!  We learnt that it’s good to ‘have a go’ at new things.

We also used the book to explore the concept of travel and languages. Mrs Unsworth showed us a globe and we could see where the country of France is in relation to England.

In addition to learning a language, we learnt about celebrating difference and respecting other cultures in the world.  We met Scruffy’s kind friend, Whiskers the cat and saw how she helps him in the story.

In week two Mrs Unsworth used the globe again to show us the oceans dividing the different countries and we talked about how Scruffy can travel by aeroplane.

We found where we live and then we talked about countries, oceans and French speaking countries.  The children were then introduced to a cuddly Scruffy.  He had a blue collar just like Scruffy in the book and a bone attached to it!

We then practised our French with cuddly Scruffy and the book.  We are getting really confident and joining in at speaking French now!   Let’s see how much we can improve over the next few weeks. We laughed as we learnt how to ask where the toilets are! “Où sont les toilettes, s’il vous plait?”

We started week three learning how to say “My name is……   in French.  “Je m’appelle…..”. The children were confident to say their name in French in front of their friends at carpet time.

We are looking forward to story making the book next! We are going to collect the cuddly characters in the story and put them in our story box. We will also draw a story map to help us retell the Scruffy story without the book.

Watch out for our next post on our blog to see how we do story making at Holy Apostles’ Pre-school Cheltenham with Scruffy the dog!

Would you like your child to learn French at one of Gloucestershire’s best preschools? Get in touch with us today.